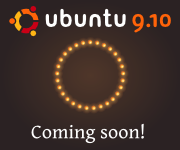 Ubuntu 9.10, the user-friendly, free, Linux-based operating system, is to be released tomorrow (the 29th of October 2009). Canonical, Ubuntu’s corporate sponsor, states that Ubuntu 9.10, codenamed Karmic Koala, ‘puts the user at the heart of its new design’, and being an Ubuntu user myself for about three years and a Linux user for significantly longer, I can certainly agree.

Having been a tester of Ubuntu 9.10 during its development, I can tell you that Ubuntu 9.10 will feature the following upon its release.

This latest version of Ubuntu provides advantages for both business workstations and home user desktops. Although not mentioned in this article so far, for enterprises and small home/offices, the server edition of Ubuntu 9.10 is also released tomorrow alongside the desktop edition.

For more information about Ubuntu, visit the official Ubuntu website.